In just a few short years, the market for period and ovulation tracker apps has exploded. There are now thousands of apps that claim to track your fertility cycle. While fertility technology, also known as femtech, has helped spread awareness and popularity of fertility awareness methods (FAM), the variation between apps can cause confusion and blur the lines between observation-based FAMs and the antiquated Rhythm Method.

The BBC recently published an article on how women are “let down” by period tracker apps—in other words, some women have unfortunately found that many period tracker apps are notoriously ineffective or untrustworthy, especially as a natural form of birth control.

It’s true that many period tracker apps cannot be depended on for accuracy in family planning, not to mention confidence that their data will be kept private. But not all period tracker apps are created equal. And success with the app will depend on what your goal in using the app is. If you are trying to follow an observation-based fertility awareness method—and especially if you’re trying to avoid or achieve pregnancy—then yes! Some cycle tracking apps will let you down, while others can be quite effective.

So how can you know if the period or ovulation tracker app you’re using is backed by science, and up to the task of being used for effective, natural family planning?

We’ve broken things down into four easy questions to help you discern if your app is following a science-based fertility awareness method, making it more trustworthy for natural family planning—or whether it’s nothing more than your grandmother’s Rhythm Method cloaked in code.

Fertility awareness advocates know that periods are a byproduct of ovulation. In other words, without ovulation, there is no period. (This doesn’t include withdrawal bleeds, that is, the monthly bleeds that happen on hormonal birth control, which occur even if ovulation hasn’t happened.)

While the period is the most visible part of the menstrual cycle, ovulation is really the main event. Everything in your cycle is geared toward the maturing and releasing of an egg (or ovum) from a follicle. Menstruation occurs about two weeks after ovulation if the egg has not been fertilized. Therefore, a good question to ask about an app claiming to be a fertility cycle tracker is this:

Is the app merely tracking your monthly bleeding, or does it also ask about ovulation?

If your app does ask about ovulation, how is it tracking it—based on the days since your last period? (This makes it less reliable.) Or is it asking you to monitor your body’s real-time biomarkers like cervical fluid? (This makes it more reliable.)

If the only information you put into your app is when your period starts, it can’t tell you anything (reliably) about your fertile window. If you have somewhat regular periods, the app might be able to give you a ballpark prediction of when to expect your next bleed, but that’s merely a predictive algorithm—which makes it more like the antiquated Rhythm Method, and not a modern FAM. If ovulation is delayed—due to stress or illness or sheer happenstance—period date-tracking on an app won’t detect that, and it may even tell you that your period is “late” when really, it’s ovulation that was (or is) late.

What signs of fertility (aka biomarkers) does your app track?

The only biomarker that can tell you about your real time fertility today is cervical fluid. While other biomarkers like basal body temperature, LH testing, and progesterone testing can confirm that ovulation has already happened, they don’t tell you anything about when your fertile window opens—which, if you are trying to avoid or achieve pregnancy, is a pretty crucial piece of information.

If you want a reliable fertility cycle tracker app, make sure to choose an app that tracks cervical fluid—at minimum—along with other signs like bleeding or basal body temperature to confirm that it’s acceptable to use as a fertility awareness method.

Does the app rely on an algorithm to predict fertility, or are YOU the one telling the app when you’re fertile?

Does your app have any predictive factors to it? If so, can you override them in the case of delayed ovulation or other cycle disturbances? If you are using a cycle tracker app for family planning, you should be telling the app when you’re fertile—not the other way around. Each day should be a new observation and a new day to determine fertility status.

What makes a FAM effective for family planning, is when a woman reads her biological signs and marks them down on a chart (or in a charting app)—which she and her partner can then use to make decisions about whether to have intercourse depending on how fertile they are, and whether they want to avoid or achieve pregnancy. But being able to make these informed decisions all starts with a woman monitoring her body’s unique and measurable signs of fertility in real time—not with an algorithm guessing at dates.

Of course, algorithms in themselves can be helpful—provided they are used with the understanding that at any time, real time observations could trump the algorithm. And certainly, having regular fertility cycles makes algorithms more reliable. But even the most regular cycler has the one outlier cycle every now and then.

That’s the advantage of modern, observation-based FAMs. Unlike the Rhythm Method, modern FAMs catch these fertility cycle aberrations as they happen, allowing you to make decisions about your family planning goals along with the observations. That’s also why having irregular cycles doesn’t disqualify women from using FAMs effectively!

With FAMs, education is the key to family planning success

No matter what fertility cycle tracker app you use, getting proper education in your chosen fertility awareness method from a certified instructor is the first step toward maximizing your method’s effectiveness.

Even with the plethora of fertility cycle tracker options in the app store, nothing can replace the guidance, support, and knowledge from someone trained in the method. Not to mention, FAM educators can give you feedback on your charts and even identify some basic red flags for your hormonal health. They can also grow with you in the understanding of your body as your charts and hormones change throughout the years.

The bottom line? To make sure your fertility cycle tracker app is compatible with an evidence-based fertility awareness method or method of natural family planning, make sure it:

Can You Trust Fertility Tracking Apps with Your Data?

Just How Long is the “Fertile Window” Anyway?

What is a Fertility Awareness Method, and how do you start charting with FAMs?

When it Comes to Irregular Periods, Fertility Charting Works Better Than Birth Control 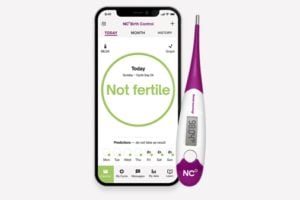 Can You Trust Fertility Tracking Apps with Your Data?