Why is Male Reproductive Health Declining?

posted on January 16, 2016 by Natural Womanhood

Male reproductive health has been in decline since the 1960s. Once considered a global problem by the 1992 study “Evidence for decreasing quality of semen during past 50 years,”[i] it has been shown that the decline in semen quality is largely limited to Western countries.[ii] 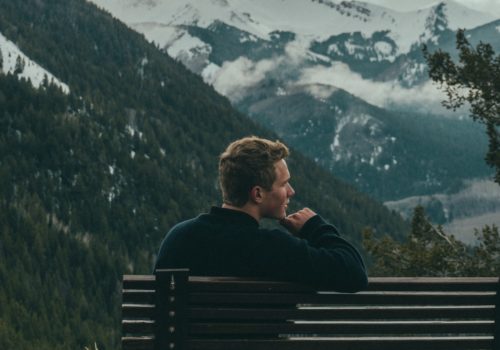 In the same places, and over the same time periods, there have been noted increases in male reproductive diseases. A 2003 study showed that the rate of testicular cancer doubled over the last 30 years “in the majority of industrialized countries in North America, Europe and Oceania.”[ix] A review of multiple studies entitled “Are Male Reproductive Disorders a Common Entity?” found evidence for “high and possibly increasing frequencies of undescended testis and hypospadias” (a birth defect of the urethra in the male that involves an abnormally placed urinary opening) as well.[x]

The hypothesis has been validated by subsequent research. In utero exposure to artificial estrogens negatively impacts male reproductive health. The 2006 study “Estrogen effects on fetal and neonatal testicular development” clearly demonstrates “that fetal and neonatal testes are very sensitive to estrogens”[xii] while the 2003 study “Environmental estrogens and sperm counts” shows that both animal and human data with DES (a synthetic estrogen), show that “it is biologically plausible that in utero exposures to exogenous estrogenic compounds are capable of reducing sperm production in adult men.” Several studies have found an association between exposure to artificial estrogen and male infertility in both human[xiii] and animal[xiv] studies.

Although more research is needed, the 2003 review of multiple studies “The ‘hypospadias hypothesis’– where do we stand now?” sums it up well: “Whatever the truth emerges to be, it is as clear today as it was in 1993 that fetal testicular hormones, whether androgens or estrogens, will figure prominently somewhere in the cascade of changes that leads to male reproductive developmental abnormalities.”[xv]

What artificial estrogens are we exposed to?

The study “Are Problems With Male Reproductive Health Caused by Endocrine Disruption?” lists the main artificial estrogens in order of potency: 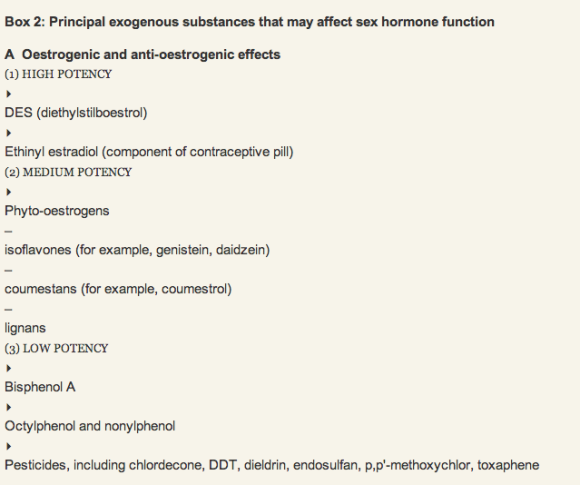 The author goes on to note that, “there is no epidemiological evidence on industrial compounds with estrogenic activity (other than DES), such as bisphenol A, octylphenol, and nonylphenol…As these compounds are pharmacologically similar to phytoestrogens but far less potent, it is difficult to believe that there is a harmful effect.”[xvi] Along with similar studies which have shown a minimal effect of often-discussed industrial estrogens like BPA on male fertility and reproductive health, this study indicates that, if the “estrogen hypothesis” is correct, we should view ethinyl estradiol (EE), an artificial estrogen produced for use in the most hormonal contraception, as a potential major player in male exposure to artificial estrogens.

Research into the effects of ethinyl estradiol is still limited, but what exists shows that environmental exposure to hormonal contraception has serious effects on male reproductive health. A 2013 study of 405 hypospadias cases found that “hormone-containing contraceptive use during pregnancy especially increased the risk of middle and posterior hypospadias”[xvii] and a 2012 study entitled “Risk factors for undescended testis” found that undescended testis are associated with the “use of oral contraceptives after conception.”[xviii] A 2009 animal study found that “neonatal exposure to EE at 10 ng (environmentally relevant dose) adversely affects male reproductive organs”[xix] and a 2011 ecological study published in the BMJ found a significant association between a country’s incidence of prostate cancer and oral contraceptive use.[xx] The fact that hormonal contraception has the capacity to negatively influence male reproductive health is especially concerning considering the potential proliferation of ethinyl estradiol in the environment.

If you’re looking for an organic method of family planning, especially if you’re concerned by the effect of artificial estrogens on any potential pregnancy, consider the benefits of fertility awareness methods. These methods are green, effective and safe, empowering women to avoid or achieve pregnancy by teaching them to accurately locate their time of fertility at every cycle.