Can the birth control pill cause birth defects?

As January is National Birth Defects Prevention Month, you may have seen articles like this one in Time Magazine claiming that birth control pills are not linked to birth defects. It’s because a recent large scale study from Denmark just came out with these conclusions. But this study is not telling the whole story and the news distracts us from the real problem. In fact, it’s missing the mark on serious effects of the Pill’s chemistry on the fetus. Here is the rest of the story: babies whose mothers have been on the Pill and are thus exposed to synthetic estrogen may not show the birth defects researched in the Danish study, like a congenital heart anomaly or a missing limb, but are likely to suffer longer term effects such as prostate cancer, breast cancer, or low sperm counts. Yet there is a deafening silence and lack of research on this inconvenient truth. 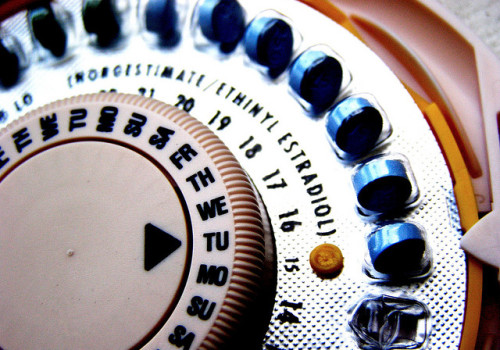 Three years ago, our daughter created a very clever animation video as part of a communications project where she made a statement that the Pill was linked to prostate cancer, which at first glance sounds like an odd concept. Last summer, this allegation was clarified for me when I attended the Contraceptive Conundrum Conference in Washington DC and heard a presentation by Frederick Vom Saal, PhD. Dr. Vom Saal is a developmental biologist and professor of biology at University of Missouri-Columbia, Miss. He is a fellow of the American Association for the Advancement of Science. The National Institute of Health funds his research. He was interviewed by PBS in 1998 on his research showing the relationship between estrogen found in the environment and prostate diseases.

What history and world health data tell us

We must learn from history. Vom Saal’s introduced his presentation by reminding us of the DES scandal. Between 1940 and 1971, millions of women were prescribed a drug called DES as a way to prevent miscarriages. In 1971, this drug was found to cause a 40-fold increase in risk of vaginal or cervical cancer in the teen or adult daughters of these women. A major lesson from these tragic events was that when pregnant women absorbed certain forms of estrogen, they exposed their fetus to small amounts of the hormone and it would have grave and irreversible health consequences for their baby. It also showed that these consequences would only show up much later in the child’s life.

What happened to these women had been previously demonstrated on mice. “There was data that was ignored because it was animal research that wasn’t relevant to human health,” reports Vom Saal. But the reality of the syndrome showed the contrary: the animal research was predictive of the human impact. “We know that mouse cells are essentially identical to human cells in the way that they respond to these hormones,“ said Vom Saal. Such biological evidence allows him to correlate the results observed in his research on mice and what we all observe in public health statistics.

Indeed, if we focus only on men’s health, which is Vom Saal’s research field, we find two areas are of major public health concern: 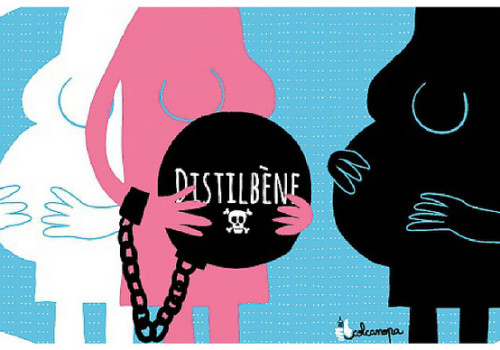 From the DES Daughters Blog http://bit.ly/1SVdf0Z “DES: No Pregnancy No Motherhood, a LifeTime Poisonous Ball and Chain to Carry”

The science behind the facts

While traditional toxicology studies look at elevated levels of chemicals and their relationship to diseases during the lifetime of the person, Vom Saal research shows that in fact very small amounts of estrogen impact the fetus permanently, showing its effects during the rest of the person’s life, in ways that cannot be corrected. Further, he claims that such changes could be multi-generational.

This discovery led to further research on mice. Vom Saal was able to show that by exposing the fetus to very small amounts of estradiol estrogen (also famously known as EE) at critical times of development, the resulting males’ prostates had doubled in size compared to the control sample. Later, when exposing the adults to normal hormonal changes due to age, 100% of these males got prostate cancer.

“We see dramatic change in the sprouting of glands within the fetal prostate. We see changes in testicular sperm production. We see changes in the structure of the endocrine control region in the brain, which is accompanied by changes in sex behavior, aggression, the way these animals behave towards infants, their whole social interaction, the way they age, the time that they enter puberty, the age at which they cease reproduction. It changes their entire life history, and these changes are capable of occurring at very low levels of hormones,” reports Vom Saal in his 1998 PBS interview about environmental EE. In this study published in the journal Human Reproduction, exposure to a small dose of EE (from 0.002 to 2 µg/kg/day) during the early phase of gestation led to an increase in the prostate weight, a change in its response to hormones, and a significant reduction in sperm count.

Vom Saal claims that the dose of EE in the Pill, which is about 0.3 µg/kg/day, has similar potential effects. Not only does it change the physiology of the person’s reproductive system, but it also affects the way the cells in the organs will respond to hormonal changes in the future. That’s where the higher risk of cancer comes from. That’s how the DES daughters syndrome happened. Could it be why prostate cancer is so prevalent or sperm count reaching crisis levels?  Vom Saal along with other scientists[i] are certainly making a strong case for it.

What is the exposure with the Pill?

The big question for women on the Pill is when does it likely happen, so that one would know when to quit hormonal contraceptives to minimize the chance of exposure? The answer is quite broad: before, during and after conception. According to Dr. Vom Saal, the impact can start as soon as the egg starts developing in the ovaries, which is 2 ½ to 3 months before conception: “you are at a stage of development of the ovocite when it’s absolutely clear that hormonal insults to the mother can impact that process.” Exposure during conception is pretty common. About 9% of women on oral contraceptive pills get pregnant. In the US, it represents about 1 million babies a year. Worldwide about 10 million. To make matters worse, it takes at least a couple of weeks for a woman to know she is pregnant, and some women won’t realize they are pregnant for some time simply because the pill is already suppressing their periods, which will potentially extend the duration of the exposure.

Dr. Vom Saal’s focus is on the male reproductive system. There are other areas and organs that are very likely affected in a similar fashion. The same process applies to female breast tissues and their response to estrogen, which can lead to breast cancer later in the life of babies exposed.

The CDC provides a list of measures to prevent birth defects, from eating healthy and avoiding harmful chemical substances to taking folic acid supplements. But they don’t warn about EE exposure from birth control. There is a deafening silence on these questions. “If anybody was looking, which the medical community does not want anybody to do because there is just panic over this, you would see the same kind of data. There is a massive uncontrolled experiment going on and nobody is collecting this data,” stated Dr. Vom Saal. Before we hurry and say it’s safe, have we really made sure?

[i] Estrogenic chemicals in plastic and oral contraceptives disrupt development of the fetal mouse prostate and urethra. Communicated by Howard A. Bern, University of California, Berkeley, CA, March 28, 2005 (received for review November 2, 2004)