When Natural Womanhood asked me to write about my experience with coming off the birth control pill, I initially protested, thinking “I had no bad side effects while taking the pill or when I quit taking them. In fact, all I remember is how well the pill cleared up my skin!”

But the more I thought about it, the more I realized that although I could’ve been a poster child for what the pill is “supposed to do,” my story wasn’t quite that simple. In truth, I didn’t realize what hormonal contraception was doing to my fertility while I was on it, and it was months after quitting birth control before I learned its full effects.

Like many women, my birth control story begins in college…

My story begins in college when I began using the Depo Provera shot. I got a shot every 3 months, during which time I wouldn’t get a period. While that may seem like a boon to many, I didn’t like the weeks of light bleeding that I’d get before the next scheduled shot. So, after a year or so, I switched to the pill.

I had no negative side effects from using the pill, although I was in college and not much fazed me at that age. After all, late nights, early morning rotations at the hospital for my training as a clinical laboratory scientist, a poor diet, and the stress of high expectations and wedding planning didn’t have much effect on me either! I was actually quite happy that the pill had made my acne disappear for the first time in 10 years—and just in time for my wedding!

Early the next year after my husband and I were married, we decided I should quit the pill so that we could begin our family. I had every expectation that within a few months, we’d see a positive pregnancy test. I was so naïve—and confused! I hadn’t experienced any negative reactions when coming off the pill, except that my period came unpredictably, as it always had when I was a teen, before I began the birth control that would give me a regular “period” (which, I have since learned, was not really a period at all). So, I had no reason to expect that we’d have any difficulty conceiving.

Still, months went by and there were no signs of pregnancy. A whole year came and went. I died a little inside each time my period came. My husband says I was depressed and became unbearable to be around.

After a year of this trying and waiting went by, I scheduled an appointment with my doctor. After she did a pelvic exam, she announced that there were no obvious issues. She asked if either I or my husband had any medical problems, or if I had ever had any issues with my menstrual cycle. When I told her “no” (not realizing that the unpredictability of my cycles now and as a teen could be significant) she merely gave us the generic advice that my husband should avoid hot tubs and tight undies. She said I could try charting my temperature each morning, but mostly that we shouldn’t stress about it. Don’t stress about it—right, lady.

What had those pills and shots done to my body?

I began to wonder what those pills—and the Depo Provera shots before them—had done to my body. Those drugs, shots, and devices chock-full of synthetic hormones that are handed out so readily to anyone who asks for them, and which seem to be used universally as the antidote to irregular periods, painful periods, heavy periods, PMS… and of course, pregnancy. If hormonal contraceptives could mess up my hormones and fertility so much, why hadn’t someone warned me? I, of course, knew nothing about cycle charting at that point, and I didn’t know how healthy or unhealthy my cycles were while coming off the pill, other than my period came unpredictably, as it always had since I was a teenager.

While pondering the possible effects of birth control on my body, I worked to optimize my health, and I especially began cutting back on intense exercise. After a few more anxious months, we finally got a positive pregnancy test and went on to have a healthy baby boy!

By this point, I had a hunch that my infertility woes were likely due to how sensitive my body was to the artificial hormones in the Depo Provera shots and in my birth control pills. I’d only been on hormonal contraceptives for 2 years total, but it seemed to me that they had clearly affected my fertility for over a year after quitting them. I vowed to never again use any type of hormonal birth control, though I didn’t know what other options I had for family planning. Quite frankly, I didn’t care—I wasn’t going to put a chemical in my body that messed up my fertility again. Instead, we took advantage of the natural pause in menstruation and fertility caused by breastfeeding to space our children.

Still, it did take us about 9 months to conceive our second baby after my cycles returned, even though we never used any kind of contraceptive. It wasn’t until after our third baby that a friend told me about the Creighton Model, and I became intrigued enough to learn how to chart my cycles. I soon realized that our difficulties conceiving could have been because my cycles were so irregular—we had no way of knowing when I was ovulating, and no way to plan intercourse according to my fertile window to optimize our chances of conceiving. In addition to possibly delaying my return to fertility, the contraceptives I had been on for two years had masked this significant cycle irregularity, which I could have gotten help for much earlier on if I had known about it—and what a detriment it would be to my ability to conceive someday.

Still, it’s better to learn about one’s health and fertility later than never—and since learning to chart my cycles, there is no guessing about when I’m fertile anymore. In fact, our two children since learning to chart my cycle have been conceived within 1-2 months of trying! Needless to say, I am so thankful to have finally found a healthy, natural way to plan our family and monitor my fertility. I only wish I had known this information earlier—as a teen, even!—so that I could have been better informed about the significance of a regular cycle for good health and fertility, and about the potential risks and side effects of hormonal contraception.

Teaching others that better options are available

I’m thankful that since learning more about how much hormonal birth control affects my body, that I have not suffered any long term effects. Despite always being a health-conscious person, I marvel at how easy it was for me to simply take the pill as an easy fix. I saw so many women around me using it, and I didn’t know there were other options.

I’m grateful that through learning a fertility awareness method, I’ve gained an appreciation for my body. I’m also so grateful for the chance as a charting instructor, to teach young women and couples that they have healthier options than birth control for both family planning and fixing menstrual cycle issues. Those are the kind of family planning “side effects” that I think everyone can (and should) get behind.

Coming off the Pill: Cassie’s Story 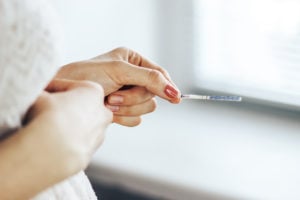 Coming off the Pill: Cassie’s Story