Do women’s periods really sync up?

Fertility awareness user Megan W. noticed something odd when she experienced bleeding every week while living in an open bay dormitory at basic training for the Air Force. She chalks it up to her body trying to synchronize itself with the other trainees living in close proximity for those eight weeks.

“It was maddening!” she said. “I kept thinking I was done and then it would happen again.” She is not alone in this experience. 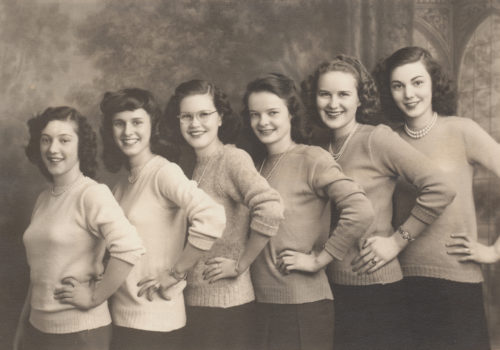 In a recent follow-up with a fertility awareness client, I asked her to tell me a little more about her experience in her teens with her first period. She reported that her best friend got her first period and two weeks later, she started hers. It did not seem coincidental to her.

Having taught a Fertility Awareness Based Method (FABM) of charting their cycles to a pair of sisters, I noticed that between the two women that they had similar (although not identical) cycle patterns and even shared a particular common cycle abnormality. Mothers and daughters find themselves menstruating at the same time, and in some families, this may be down to the day at least for a time.

So, what causes the mysterious phenomenon coined “menstrual synchrony”? For now, it remains a strong theory that is mostly captured through the lived experiences of mothers and daughters, sisters, roommates, and good friends who live in common or spend a large amount of time together.

According to a Huffington Post piece, the first significant research on this topic was conducted by psychologist Dr. Martha McClintock in 1971 (1). She compiled data from 135 women living in the same all-female dorm at Wellesley College. She had the women track the start dates of their periods and noted friend groups and pairings within the dorm, concluding that women who spent significant time together, cycled together. (On a side note- it would have been interesting if they had tracked using FABMS so they could have utilized other data in addition to dates.)

According to McClintock’s theory, pheromones are responsible for women’s cycles aligning. Pheromones are chemical signals produced by a person (or animal) that stimulate a biological response (through smell). Pheromones are also at play in the science of attraction and love.

Some disagree with McClintock’s findings. A follow-up study conducted in the years following McClintock’s work has illustrated heavy skepticism in the concept of menstrual synchrony. Zhengwei Yang and psychologist Dr. Jeffrey C. Schenk approached this in two ways: 1) by conducting their own study using a similar sample size of college-aged Chinese women living in common and 2) by examining and critiquing McClintock’s research, particularly citing “repeated cycle convergences and subsequent divergences” (2). The Huff Post explained the researchers’ jargon in layman’s terms for us: “Women might think they’ve synced up their periods when they may have only randomly aligned for a short amount of time and will likely phase in and out of their matched-up schedules” (1).

So, who really knows whether our pheromones are synchronizing menstrual cycles or if it’s just a fun myth perpetuated by stories and the bond of commiseration? Either way, the bottom line is that we were meant to have community.

We at Natural Womanhood want to inspire a revolution that encourages everyone— roommates, sisters, mothers, daughters, and all women— to get serious about tracking their cycles and hold one another accountable in this important task. It is easier (and more fun) to do this when you know others who are using FABMs, too. Together, we can help each other learn what is normal and what is not, have a safe and effective alternative to harmful chemical contraceptive methods, and lead healthier, more fulfilling lives.

What are Missed Period Pills?