Who tells the truth about the effectiveness of fertility awareness methods?

It’s been interesting to see articles popping up more and more frequently with accounts of the problems with contraceptives, from Vanity Fair making public the scandal of the Nuvaring to Cosmopolitan discussing how the Pill affects women’s libido. At the same time, the mainstream media is attempting to correct all these “misperceptions” about contraceptives and doing its best to rehabilitate them with their audience. One of their strategies is to set up Fertility Awareness Methods (FAMs) as a straw man by acknowledging it but subtly or not so subtly discounting its effectiveness, a tried and true marketing strategy.

Meet William Sacs and Kati Bicknell, the two young entrepreneurs who founded the company behind the fertility tracking app Kindara. Since its launch in mid-2012 it has been downloaded in 134 countries and has helped over 25,000 women conceive, and certainly many more than that avoid pregnancy. Will and Kati are more than excellent business people. They’re passionate evangelists about Fertility Awareness; they get how it can change the world. In her bio, Kati writes: “Kindara was born out of my love for humanity, and frustration with conventional birth control methods.” 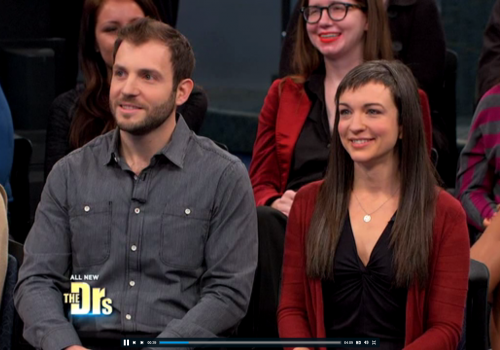 A couple weeks ago they were guests on the popular CBS show “The Doctors.” You would think it was a good step toward more transparency and honesty about Fertility Awareness. You’re wrong. It turned out more like a public chastising and questioning. As Kati was explaining how they had been using a Fertility Awareness Method and successfully avoiding pregnancy for five years, Dr. Jennifer Ashton quickly felt the need to say:

“As an ob-gyn I have to jump in there,” the doctor interjects. “You are in a monogamous, committed relationship, but what I tell couples who are not using either a barrier or a hormonal form of contraception is the stats are clear on this. Within a year 85% of couples will have a pregnancy, so the fact you haven’t had one is great for you, but that doesn’t mean you won’t have one in the future.” 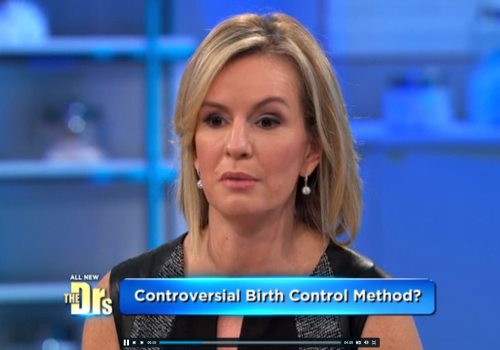 Essentially, her message was: using FAM is just like using nothing at all to avoid pregnancy, showing either obvious ignorance or ill will toward the change.

Before the interview, a short video introduction to the show makes some false statements, stating that “FAM focuses on daily cervix touching,” which can even ” cause infections,” and that FAM are “controversial self-exams” and have a 25% failure rate.

That’s not the only place where you’ll see this sort of manipulation of the facts. If you Google “effectiveness of fertility awareness method,” you’re likely to see the websites of Planned Parenthood and Bedsider show up on the top of the list. So let’s look at what they have to say.

Both list fertility awareness as a legitimate method among other methods, which is huge progress, one would think. Planned Parenthood does a fairly good job at explaining the science behind the methods. Bedsider is less specific, but still lists the types of methods available. So far so good.  Or is it?

In reality, they both find ways to discourage anyone who is really serious about postponing a pregnancy. Planned Parenthood writes: “Do not depend on tracking your fertility if you have irregular periods.”  This will surely stop a large number of women seeing as how regular periods in this stressed out world are rather rare. But it’s false information: modern techniques of FAM allow women who have irregular periods to know just as accurately as those with regular periods when they’re ovulating. It’s not a guessing game, because the bio-signs don’t lie.

Bedsider, an unabashed promoter of contraceptives, more directly writes, “Failure rates are kinda high if not used correctly—so if getting pregnant would be disastrous for you, choose another method.” Pretty direct turn off I would imagine. When they compare it with other methods for effectiveness, they claim that “fertility awareness methods aren’t among the most effective—even when practiced perfectly,” and rank them on par with the condom, and much lower than the Pill.

If you are among those who are not sure about using FAM for family planning, I imagine that these reports are a big turn off. But they’re not the truth. In reality, FAM methods have been used and tested over the past thirty years with thousands and women and thousands of cycles, using legitimate scientific research methodologies. They are proven very effective.

When I speak about effectiveness, I like to refer to an article that was published in the Osteopathic Journal of Medicine, a peer reviewed medical journal, in May 2013. The authors, two medical doctors and two PhDs, reviewed all the studies available since 1980 on a number of FAMs. They first used a technique adopted by medical journals to “assess the quality of individual studies and overall strength of a body of evidence.” They eliminated a number of the studies and retained the ones that passed the test.

Collectively, these studies reflect use of FAMs by 8,200 women in over 107,000 cycles. Overall they report that when used correctly, FAM’s effectiveness is greater than 95%. With typical use, effectiveness is still higher than 86%. However, some methods are much more effective than others, according to this article. The Sympto-Thermal Method achieves a record 99.4% effectiveness for correct use and 98% for typical use. Due to differences in study interpretation, Creighton only shows a correct use measure, which is a 99.5% effectiveness. Marquette is at 98% and 86%. Billings is 97% and 78-90% in typical use. In comparison, the Pill’s correct use is 99.7% and typical use is 92%. Condoms are 98% and 85%.

There is no question that these methods present a learning curve. It may take a few weeks for women to be 100% confident with their ability to accurately read the signs of fertility. But once they do, these methods always beat the Pill. The question is no longer whether the method works or not, it’s whether you can have intercourse or should wait. And when in doubt, when the couple is resolutely determined to avoid pregnancy, a non-physical way to make love always works!

The media and promoters of contraceptives should stop treating women like idiots. They can only postpone the truth of Fertility Awareness from reaching the public; they can’t stop the movement that’s already started and spreading like wild fire online.

We can rest on these facts and share the good news about Fertility Awareness with confidence.