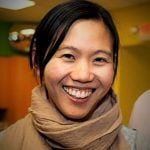 October is Breast Cancer Awareness Month, so let’s raise awareness of a few critical facts the three-decade-long $740 million campaign[1] for research funding has failed to bring to the public consciousness.

Preventive lifestyle changes—like adopting a physical activity and healthy eating as a way of life, and avoiding substances that are known carcinogens, and avoiding use of hormone therapy after menopause – have helped reduce risk. And of course, celebrity press about BRCA genetic testing and mastectomies probably doesn’t hurt either, but I don’t know if anyone has measured the Angelina effect.

Yet, in more recent years, breast cancer rates seem to be staying the same among Caucasian women, and have actually increased in African American women[3] so there is still a gap that needs to be addressed.

We need to fill the gap, which is the lack of awareness about a key player in the cancer story: hormones. I’d like to propose a prevention campaign that focuses on hormonal health. Less expensive than treatment, it is likely no less effective to safeguard against this disease that has become so prevalent since the ’80s, with one in eight women touched by it.

How hormones relate to breast health

Why is reduction in body fat an effective method of hormone-dependent breast cancer risk reduction? Because fat cells produce estrogen[4]! Did you know that?

Why does breastfeeding lower breast cancer risk, especially if you lactate longer than 6 months[5]? Um, because that’s what breasts were designed for so they are super happy when they fulfill their intended purpose? Well, okay, that’s how you might explain it to the kids but it’s really because lactation delays return of menses and the rise and fall of estrogen that goes with return to regular cycles. Scientists have shown that less exposure to estrogen equals less risk of breast cancer. [6]

Why does induced abortion increase a woman’s risk of breast cancer[7]? Same reason why long-term birth control use increases risk – because it disrupts breast cell growth and development during the critical natural process of pregnancy (or sexual maturation)[8]. Did you know that?

What’s a common cycle pattern exhibited by women who have or are at-risk for cervical and breast cancer, and even heart disease? Long and irregular, often with out-of-place bleeding[9]. Did you know that? Does your doctor know that?

In my imaginary hormonal health awareness campaign, I would make sure that women and those who cared about them would have a thorough understanding of basic, need-to-know facts that will drive them to make good health choices to mitigate risk.

For example, the importance of body composition (i.e. percent fat mass vs muscle mass) over total body weight…but I digress.

For now, let’s focus on the importance of minimizing unnecessary exposure to not-naturally-occurring hormones, the most common source being the oral birth control and birth control implants. 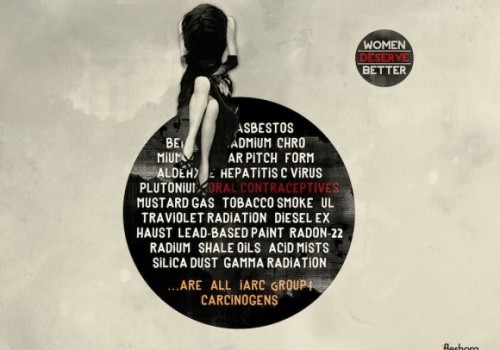 To unpack all that scariness, basically if a woman takes the Pill for two years before she’s 25 and before she’s had a full term pregnancy she increases her risk of breast cancer tenfold.

Pink ribbons on bumpers are great, but where is the bumper sticker that advertises these research findings? Why do endocrine hormone disruptors like phthalates and BPA, which are not nearly as directly linked to breast cancer risk, receive so much more attention and public consumer action? It sounds like what’s being raised is a partial health awareness.

There’s obviously huge interest in this disease, and the funding that goes with it. I don’t have the answers on how to obtain funding for a campaign that focuses on the whole story of natural hormonal health, however I can share more of the key messages I would include if such a campaign existed.

Charting can help with early detection

Ladies, do you know what changes in your breasts mean? Other than mammograms, do you ever check the look and feel of your breasts? Are you the type of woman that experiences breast tenderness and swelling at certain times of the month? Have you ever paid attention to patterns in breast changes?

One of the most commonly taught and used fertility awareness based methods, the Creighton Model of fertility appreciation, has built-in breast cancer self-detection. It comes in the form of monthly reminders to do a self-exam at the appropriate time in the cycle, when menses are over and hormone levels should be low.

This practice helps a woman to realize if any changes she detects are cyclic, due to the natural effects of the natural rise and fall of estrogen in her body, or persistent and need further investigation. By far my favorite outcome of this simple little habit is that it appoints the woman herself as Chief Early Detection Officer. Imagine the health care dollars that could be saved!

Breast self exam – in tandem with cycle charting – is not going to catch everything, of course. Since in it’s most treatable early stages, breast cancer is not always detectable, we need good options for screening for breast cancer and the jury is still out on what the best ways are.  If a tumor is growing, the most common physical sign is actually a painless lump. The lump can be within the breast itself or towards the lymph nodes in the underarm area. You have to get right in there and examine methodically.

Other less common signs and symptoms:

Any persistent abnormality in the breast should be evaluated by a physician ASAP – operative word: persistent, hence the need to take note, chart, document.

Bottom line: Know these symptoms and check for them every month. If something seems different, you could catch cancer before it goes further.  I believe every woman can be smart enough to know if something is not right with her body.

Self care is self love

Have you read the phenomenal story of one woman’s return to self love through charting? I loved it so much because not only does it emphasize a key benefit for women in an age of self-deprecation, but it also reminded me of an article I published about returning to a genuine love of food and eating. Yet charting is SO much easier than changing your food intake, or your attitude towards your health and your food intake.

Take the time to pause, note what’s going on with your hormones, and add that little time to yourself every month to do a breast exam at the end of your period. It has the ability to relieve stress, help you feel better about yourself – and maybe, just maybe, even save your life.

A must read update on this topic: “A 2014 meta-analysis of 36 studies from mainland China reported a 44 percent overall increase in breast-cancer risk among women who had had an abortion. But the strongest evidence comes from South Asia — India, Pakistan, Bangladesh, Sri Lanka — where the typical woman marries young, has several children and breastfeeds them all, and never drinks alcohol or smokes cigarettes. In such populations, where there is little else besides abortion to cause breast cancer, relative risks for abortion average greater than fourfold and as high as twentyfold, according to at least a dozen South Asian studies in the past five years alone.”